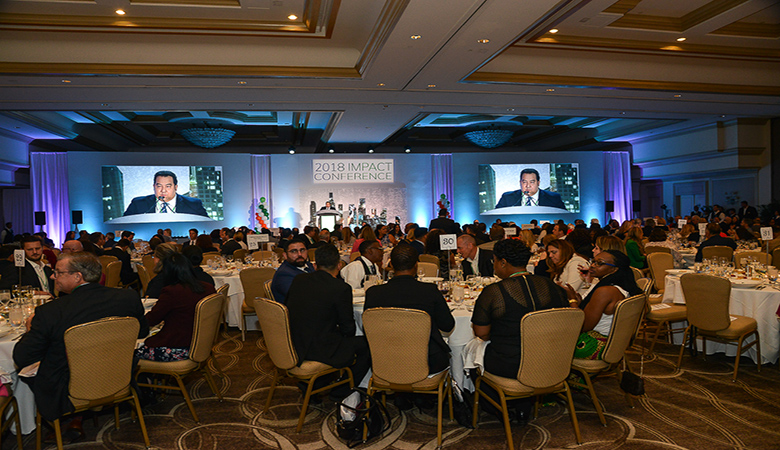 This year’s conference kicked off with Leadership Miami’s 39th graduation ceremony followed by the Salute to Miami’s Leaders Awards Dinner. The awards recognize individuals from a variety of categories including Finance, Government, Law, Professional and Non Profit sectors. This year’s Power Leader of the Year was Penny Shaffer of Florida Blue and the Visionary Leader of the Year went to The Honorable Francis Suarez, Mayor of Miami.

The next morning, Professor Richard Florida opened the general session sharing his perspective on the future of Miami and the rise of the creative class. After his presentation, the traditional passing of the gavel transitioned the Chamber’s Chairman position from Gene Schaefer of Bank of America to Carlos Orta from Carnival Corporation.

One of the highlights of the conference was the multi-generational panel discussing Miami’s past, present and future. The panelists included Mr. Al Dotson Sr. and Al Dotson Jr, The Honorable Xavier Suarez and his son, the Honorable Francis Suarez and Michael Pappas from Keyes Realty and his daughter Christina.

Jose Mas opened the Good to Great Awards Luncheon where the Chamber recognized companies that have exhibited strong growth in South Florida. The winners were: Adonel Concrete, YellowTelescope, TotalBank and Spirit Airlines.

The afternoon was made up of presenters including Claudio Muruzabal, President of SAP Latin America, Facebook and a series of panels discussing the impact of new currencies and e-commerce on South Florida.

Overall, the conference was considered to be a great success with over 400 members in attendance and a variety of presenters that provided the audience with stimulating topics that are relevant to South Florida’s growth and future success.