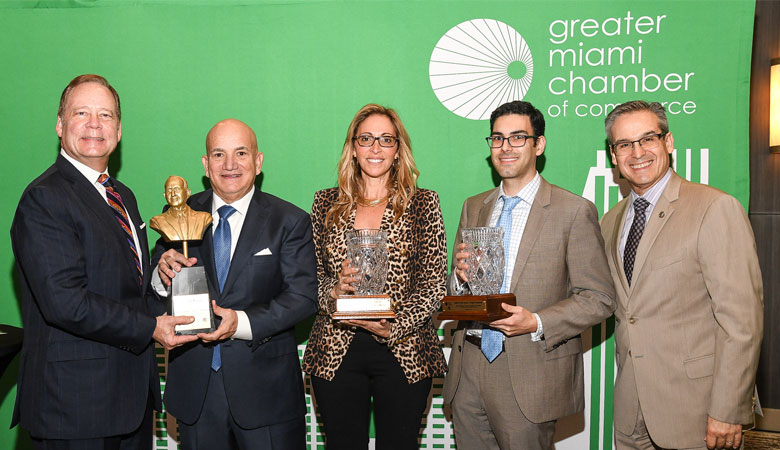 The final trustee luncheon of 2019 attracted close to 375 guests to Jungle Island as we recognized the 6th Annual Alvah H. Chapman, Jr. Award of Excellence honorees, presented by The Allen Morris Company. We celebrated Alvah’s legacy by presenting distinguished leaders in the Miami community with a distinct award for their vision and leadership of Downtown Miami.

This year’s winners by category are:

Jessica’s role has transformed the Central Business District into a place where businesses come to grow, and people want to live. “We’ve been so devoted, such advocates and ambassadors for what has become one of the most extraordinary cities (I believe) in the world,” said Jessica as she accepted her award while reflecting on her father’s vision that began 30 years ago when he arrived in Miami.

Knight Foundation, Organization Recipient, Alvah H. Chapman, Jr. Award of Excellence is a national foundation located in 26 cities that’s investing in journalism, the arts, and the success of cities where brothers John S. and James L. Knight once published newspapers. We recognized the Knight Foundation for their outstanding position as pioneers in establishing themselves in Downtown Miami and whose vision and programming has taken the Central Business District to new heights.

Sam Gill, VP of Communities and Impact and Senior Adviser to the President, accepted the award on the Knight Foundation’s behalf, “This honor really has dual significance for the Knight Foundation. First, a recognition for our commitment to Miami, a city with very special significance to the Knight Brothers…and we’re honored to join the ranks of previous honorees. Our commitment to Miami has never looked stronger.” Knight has invested more than $30 million in advancing the local start-up community and over $165 million in the local cultural environment as they believe great art attaches people to a place and to each other.

Carlos A. Migoya, Individual Recipient, Alvah H. Chapman, Jr. Award of Excellence is the President and CEO of Jackson Health System. The majority of Migoya’s professional journey was dedicated to the banking industry (over 40 years), eventually becoming CEO of Wachovia. He also served as Miami’s city manager, handling and ailing city budget issues. As the President and CEO of Jackson Health Systems, he has led a team that transformed Jackson into one of the nation’s leading health systems where “growth is the prescription for the future.”

Migoya is a visionary leader that has played an active role in developing concepts and strategies that have transformed our community into a true first-class city. “He (Alvah H. Chapman, Jr.) was one of my great mentors…there is still a thread that I hope connects me to Alvah’s legacy…we do this work to help others,” stated Migoya during his acceptance speech.

In addition, the Greater Miami Chamber of Commerce acknowledged Alyce Robertson, Executive Director of the Miami Downtown Development Authority, with a Certificate of Stock for her contributions to the Downtown Miami community.

December’s Trustee Luncheon, presented by title sponsor Florida Power & Light, also paid tribute to American Airlines’ “30 years and soaring” in the Magic City. Juan Carlos Liscano, Vice President of Miami Hub Operations, spoke about the progressive stride the airline has made, “In 1989, we were flying to six cities. Today, we travel to 142 destinations, that’s 48% of the departures from Miami International Airport.” Miami receives two-thirds of overnight visitors from 43 countries through American Airlines, with an influx of 20% from Latin American markets, Brazil, Colombia, and Argentina.

“Miami is a hub to the Americas, make no mistake about that. If you want to succeed in Latin America this city is critically important to that success. We understand clearly that our success and leadership in the region not only benefits American but also benefits Miami,” Liscano explained American Airlines’ impact on Miami and the rest of the region. The airline’s connections in Latin America and the Caribbean markets have enabled them to destinations in Europe. According to Liscano, American Airlines is the largest airline in the state of Florida with an economic input to the state of Florida of $32.2 Billion.