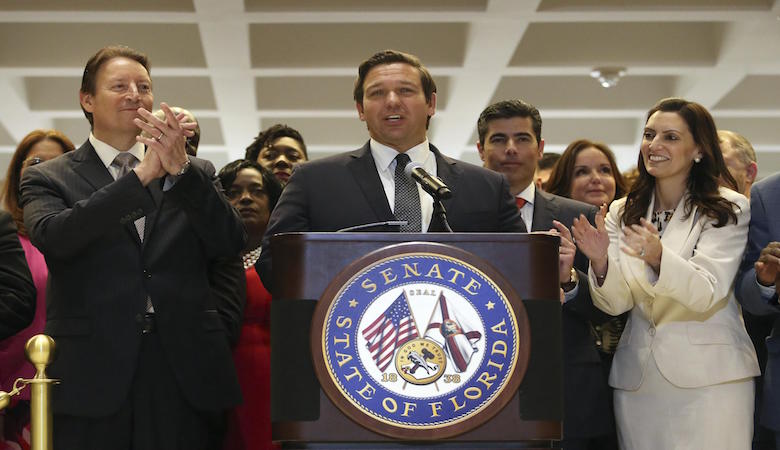 TALLAHASSEE — A $91.1 billion state budget which gives Gov. Ron DeSantis the big money he sought for environmental projects, boosts school spending and helps a struggling Panhandle rebuild after Hurricane Michael, was approved Saturday as the final act of the 2019 Legislature.

Forced into a one-day overtime session, lawmakers met for less than an hour Saturday — signing off on a budget for the year beginning July 1. The Senate approved the measure 38-0 moments before the House’s 106-2 vote.

“They delivered big wins for the people of Florida,” DeSantis said of the Republican leaders.

But the first-year governor offered few guarantees about the fate of budget items or bills passed by lawmakers.

“We’ve looked at just a little,” DeSantis told reporters about his potential veto list, which will likely include policy bills as well as line items in the spending plan. “But, oh yeah, we’ve got some stuff.”

He added, “We’ve got a $91.1 billion budget that was sent here. I think it’s pretty fair bet that it’ll be under $91 billion when we’re all said and done with it.”

Among the biggest budget items is nearly $683 million for water improvements and Everglades restoration, surpassing the $625 million sought by the governor to combat red tide and blue-green algae, which plagued the state last year.

The spending plan — just under a 3 percent hike from last year’s budget — includes $220 million for a host of Hurricane Michael recovery efforts in the Panhandle, bringing the state’s total commitment since the Category 5 storm hit last October to about $1.8 billion.

Much of the state spending is expected to be reimbursed from the federal government. And the $220 million steered to hospital and government building repairs, roadwork and to help school districts struggling with enrollment declines, falls short of many expectations.

One Panama City Republican, Rep. Jay Trumbull, had sought $400 million in rebuilding projects for Bay County alone, although only a handful of these made it into the budget.

The spending blueprint includes a $242-per-pupil increase in school spending, a roughly 3 percent hike for Florida’s 2.8 million students, also slightly above what DeSantis had sought from a Legislature controlled by fellow Republicans.

But the governor’s wish list wasn’t fully met by lawmakers. His bid for $76 million for Visit Florida, the state’s tourist marketing agency, was cut to $50 million; and another call for $85 million for a Job Growth Fund was trimmed to $40 million.

The governor also sought $423 million for a revamped Best and Brightest bonus program for teachers. While lawmakers agreed to changes in qualifying standards DeSantis which recommended that makes more teachers eligible, the Legislature steered a more modest $285 million to the program.

The budget vote Saturday was an anticlimactic end to a session that saw the House working up to and past midnight across several days of its closing weeks.

Both the Republican-controlled House and Senate stumbled past 11 p.m. Friday as lawmakers finalized a flurry of legislation. Included was a measure imposing new limits on citizens’ ballot initiatives, fought by Democrats, and a tax-break package which critics said unfairly favored the charter school industry and other special interests.

The roughly $90 million tax-cut bill includes a back-to-school sales tax holiday from Aug. 2-6 and another for hurricane season purchases that will last from May 31 to June 6.

The budget includes a $3.8 million for a new state aircraft for DeSantis, who has been relying on a refitted Florida Department of Law Enforcement plane that earlier had mechanical problems which forced an emergency landing.

DeSantis’s predecessor, now-U.S. Sen. Rick Scott, is a multimillionaire who traveled on his own jet and sold the state’s air fleet soon after he took office in 2011.

DeSantis, who took office in January, said fellow Republicans did a lot to advance his agenda.

“You can’t really do far-reaching things, unless you’re able to get this stuff through the Legislature,” DeSantis said.