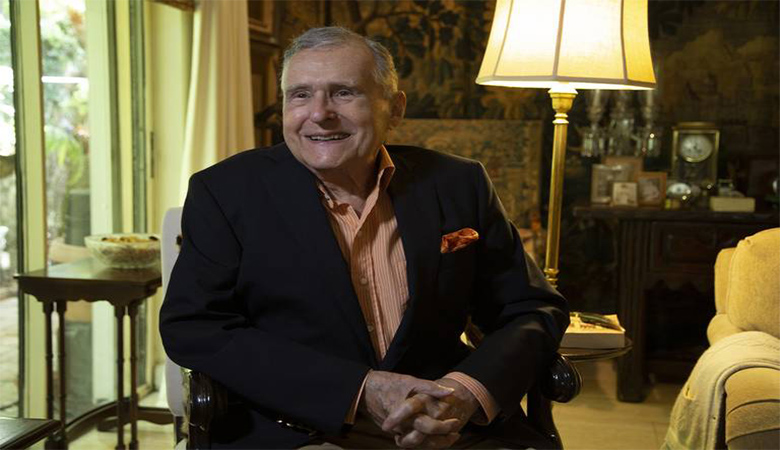 Maurice A. Ferré, the politician and businessman from an aristocratic Puerto Rican family who is widely regarded as the father of modern-day Miami, has died. He was 84.

Ferre, who had been undergoing treatment for an aggressive spinal cancer for two years, died peacefully and surrounded by family on Thursday at his longtime home in South Coconut Grove.

In his 12 often-tumultuous years as Miami mayor, from 1973 to 1985, Ferre set in motion a new vision of Miami -- then a Southern burg struggling with persisting racial segregation, decimated by suburban flight and on the verge of transformation by an unprecedented influx of Cuban refugees — as an urbanized international center.

That new conception, initially met with resistance by an entrenched civic and business elite, answered to Ferre’s cosmopolitan background and an ultimately urban vision of Miami’s possibilities. It ranged widely, from integrating the city’s workforce to fostering high-rise development along Brickell Avenue and the internationalization of business and commerce, while making a place for the inevitable ascendacy of Cuban political power that eventually swept him from office.

“He changed the face of Miami,” said Dario Moreno, an expert on local politics at Florida International University.

Ferré had remained active until nearly the end, speaking and writing publicly as a relatively recent convert to the value of park space downtown. A longtime transportation wonk, Ferré had earlier this year also registered as a lobbyist, along with his son, for a company that makes magnetic-levitation trains.

After years out of elected office, Ferré found himself again in the public spotlight earlier this year, when the Miami Commission renamed Museum Park, the former Bicentennial Park in downtown Miami, in his honor. Ferré the scion of a family that made its fortune on cement and construction, acknowledged with chagrin that as mayor he may have gone overboard in his enthusiasm for construction and development.

Even lifetime political foes came to praise him during the park re-dedication, most notably current Miami Commissioner and former mayor Joe Carollo, who renounced Ferré at a press conference where he was supposed to endorse his-re-election in 1983, with Ferré standing by his side, in one of most notorious double-crosses in city political history.