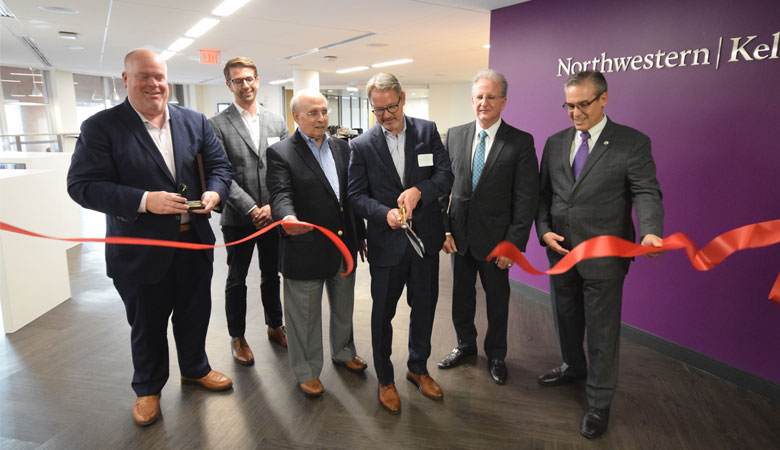 Upon a backdrop of nearly 100 guests and dignitaries, the leadership team of the Kellogg School of Management’s Executive MBA Program celebrated the grand-opening of the organization’s major expansion of its Miami satellite campus last month.

Kellogg School of Management at Northwestern University established its Executive MBA campus here 14 years ago due to Miami’s growing reputation as a center of global commerce, which attracts corporations from around the world while also serving as a bridge between the U.S. and Latin America.

In his remarks, Director of Executive MBA-Miami Steven Thompson said, “Coral Gables has proven to be the ideal location for us. The close proximity to the airport is key, as about two-thirds of our students fly into and out of Miami International Airport to attend their class once per month.

“It is also very walkable, providing our students with plenty of amenities here in downtown Coral Gables, options that allow them enjoy themselves outside of the classroom,” he said.

According to Thompson, the 3,700 sqft of space that was added over the summer mainly consists of a new classroom and four additional study-group rooms. They also reconfigured and remodeled a significant portion of the surrounding existing space, which afforded expansion of the student lounge and other new amenities.

The new classroom not only adds capacity, but is also the most technologically advanced classroom in all of Northwestern Kellogg,” said Thompson.

The fourth expansion of the school’s Coral Gables campus since opening in 2005, the creation of much roomier student lounge in particular is a welcome addition, in that it enhances the student experience by allowing both cohorts to take their breaks together and get the most out of networking.

Starting last year, Thompson made a concerted effort to get more involved with the GMCC by becoming a Trustee, and by getting onboard with GMCC committees. He also spearheaded the school’s involvement as a sponsor and participant in the South Florida Economic Summit.

“We truly see our partnership as a vital way to deepen our engagement with the great community here in the Miami area,” he said.

GMCC President and CEO Alfred Sanchez expressed gratitude to the leadership of Kellogg School of Management at Northwestern University for making the chamber a partner during this protracted period of growth.

“Since joining the Greater Miami Chamber, we see Kellogg School of Management emerging as one of the most meaningful contributors to the fabric of our community. On behalf of the entire chamber, I look forward to working together for the betterment of the students and, of course, the businesses of Miami that benefit by such Kellogg’s MBA offerings,” Sanchez said.

The Miami campus is viewed as the school’s Latin American hub for global learning, with around one third of its Executive MBA students traveling to the class on weekends from Central and South America.

Thompson additionally noted that the diversity of thought and experiences shared in the classroom is truly special, with around 15 nationalities being represented across 60 students that have an average of 13 years work experience in an array of industries and roles. What’s more, they benefit from the same world-renowned faculty and curriculum that define the Kellogg experience.