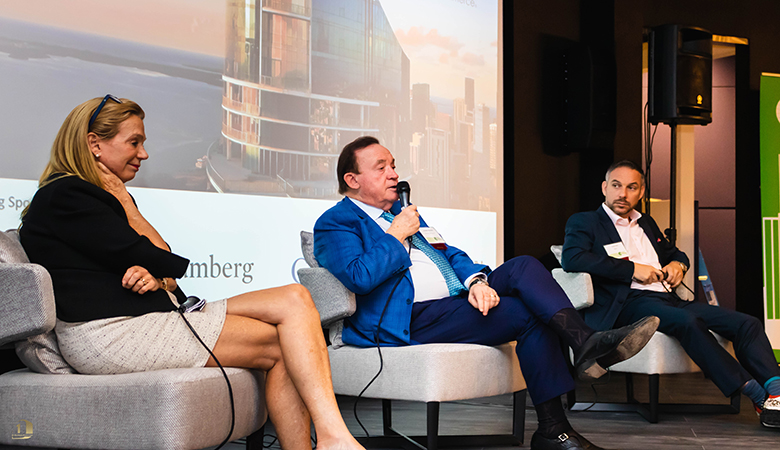 The panel, moderated by WLRN’s Tom Hudson, featured prominent South Florida developers who discussed the opportunity and challenges of their real estate projects.

For the Magic City project in Little Haiti, Tony Cho’s focus is on “respecting and honoring the cultural roots but bringing something that’s new and exciting and innovative – which is technology, innovation, sustainability, art culture & entertainment – and really creating something that we all hope could be what we all hope to be a model for the city of the future.”

Cho went on  to talk about the project’s sustainability goals: “To me sustainability means financially sustainable and environmentally sustainable… My dream is to be fully off-grid and fully regenerative. I don’t know if we can get there yet but I certainly want to push the limits to do that.”

Despite not seeing a demand for sustainability from project investors and buyers, K-Group Holdings has “taken the initiative of working on water recommendation and also we are considering using solar cells on top of the retail parking structures to fulfill the electricity needs of the common areas for the entire project,” said Kavana.  Currently, K-Group Holdings is working on the development of Metropica, 263-unit mixed-use development in Sunrise. Metropica is located across from Sawgrass Mills.

“We have never been concerned about Sawgrass being a competitor. Sawgrass has always been an anchor,” said Kavana. “People need people and people need an experience.”

Douglas also spoke about the relationship between retail and residential at Sole Miami in Sunny Isles: “Retail has morphed into a subsidiary component of the residential, so it is now definitely entertainment focused. We look at retail as an amenity to the residential project and to the University of Miami.” She described Costco and the University of Miami as anchors for the project: [They] are great anchors because they will draw people.”

She offered this advice: “The first part is maintaining flexibility and being willing to stay flexible is [important]. You have to stay in tune with the market. The second part is you get so immersed in what you’re doing but there’s a whole big world out there around it, including the community you’re in. Don’t let your blinders get too narrow and stay in touch with how Miami is developing, how North Miami is developing…It is synergistic, stay in tune with that.”

Watch a recap of the evening below: