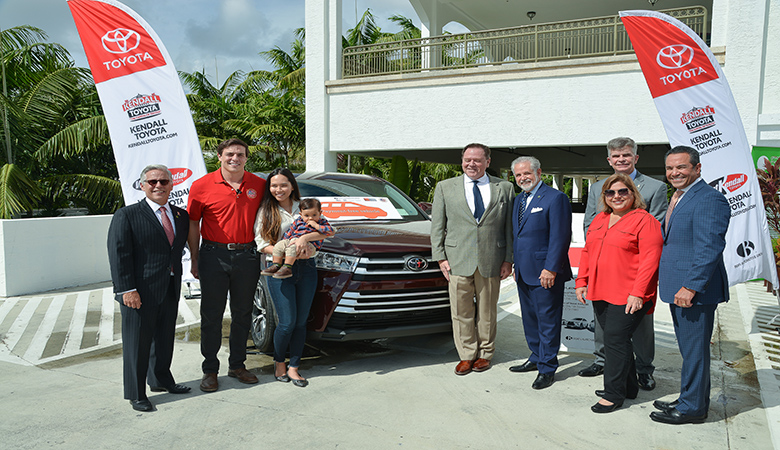 Ahead of Veterans Day, the November Trustee Luncheon program honored veterans and those in active duty. Former U.S. Army specialist Andrew Napier was presented with a Toyota Highlander, a gift made possible by Wells Fargo, Bean Auto and Warriors Support. Warriors Support’s Transportation 4 Heroes program awards payment-free vehicles to combat wounded heroes injured while in service. In addition, the recipient receives one year of family and financial mentor.  Napier served in Afghanistan: “In the summer of 2008 my company was attacked by the Taliban. I was struck with an RPG and sustained minor wounds but was still standing.”

This month’s program also featured Major General Patricia Anslow who recognized the veterans in the room: “When we hear your stories our entire nation is reminded of that great debt of gratitude permanently linked to you with the charmed stories, to your bravery.”  On behalf of the United States Southern Command, she accepted a Certificate of Stock from the Miami Chamber.

The afternoon concluded with Ron Book, Chair of the Homeless Trust, who talked about the organization’s efforts to end veteran homelessness in Miami-Dade County. Today, unsheltered veterans make up less than 1-percent of the total homeless population. He also spoke about reducing total street homelessness in the county.  As of last month, Miami has had a 90 percent reduction of homeless people in the street since the creation of the Homeless Trust: “But that’s 1,100 [people] too many,” says Book, ”We cannot [end street homelessness] without you. We have a shortage of housing. We need landlords, we need property managers to tell us they have available housing.”

Watch the CBS Miami video below for further coverage of the event: